One of the more severe complications of pregnancy is delivery before the 34th week. 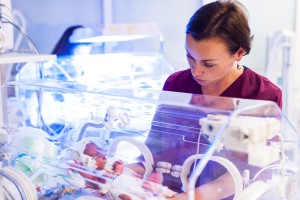 Premature birth is defined as the occurrence of regular contractions of the uterus along with other changes in the uterus (the cervix dilating) before the 37th week of pregnancy. The breaking of waters may occur.

Premature birth is a big concern for the parents. The treatment and care for the baby may end up being very long and complicated, financially and psychologically demanding for the parents. Premature babies have many serious health issues and they require special care and observation. If possible, the mother at risk of premature delivery is assigned to central hospitals (Tallinn, Tartu). Transporting the baby is safest in the womb. Intensive care and survivability and further quality of life of such babies is the highest at medical centres with the highest level and the biggest number of patients, due to having the required staff, technology and extensive experience with treatments due to having more patients.

More than half of Estonia’s very premature babies are born at the maternity ward of East Tallinn Central Hospital (ITK), where all the emergency and problematic birth givers are referred from western and northern Estonia.

ITK has contributed a lot to its 8-bed newborn ward and quality of care in the last 10 years. We started developing intensive care of newborns twelve years ago after seeing that the condition of newborns deteriorated rapidly due to transport right after birth. The main goal of care for very premature newborns is to minimize cases of illness during the age of newborn which impacts further health and development of the child, first and foremost in regards to illnesses specific to very premature babies such as BPD (chronic lung disease), bleeding in the ventricular system (IVH), cystic periventricular leukomalacia (cystic damage to the brain’s white matter – PVL), retinopathy of premature babies (eye disease caused by prematurity – ROP) and necrotising enterocolitis (inflammatory bowel disease – NEK), and to avoid serious complications and death. The less aggressive care applied during the first hours and days of life has a vital impact on decreased mortality and newborn disease rate of babies and has a positive effect on a child’s later health and development.

The only breastmilk donor bank in Estonia, founded in 2010 and providing newborns in need with breastmilk, has contributed greatly to the improvement of the results. Donor milk is given to severely premature babies until the biological mother can produce enough milk of her own.

At our hospital, we use minimally invasive and aggressive intensive care for premature babies born here, resulting in a decreased number of very small newborns who were alive at the end of primary hospital treatment and who did not suffer from diseases of newborn age which impact the development of a premature baby. 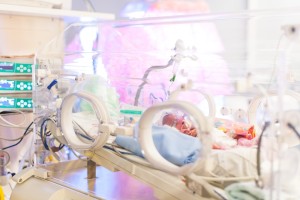 Research: The quality of care of premature newborns in Estonia must be improved.

The stopping of premature delivery is of high importance when it comes to the health and survivability of the newborn. Modern research-based treatment methods are used – prolonging the pregnancy with medicine if possible, pre-delivery glucocorticoid treatment to prepare the lungs of the foetus, neuroprotection in order to protect the immature brain of the child/foetus and anti-inflammation treatment.

Should the symptoms of possible premature delivery emerge, please contact your gynaecologist or midwife. For a check-up you can always turn to our hospital’s emergency reception.